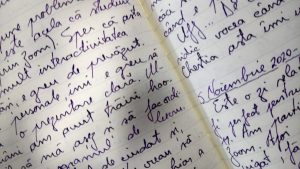 It’s easier to talk. It’s not like that? But I don’t talk to anyone but myself. The time spent to say something is much shorter and I don’t feel the need to go back over what I said because I often think that I intended to say something else and ended up communicating something else. Talk to others? Eh… Only I was missing from the list of complainers. So I keep it like this: I talk to myself. What’s worse is that, a few times, while we were walking, Mica asked me if I was talking to me again. So even she figured it out. With love, she advised me do not get used to it. But this talking to me helps me clear up my feelings, place them in my mind and heart. Sometimes even my anger… But it’s not always enough.

Then I choose the longer path: I write. So far, I have scribbled in a few notebooks, although sometimes more often, sometimes very rarely, as happened this summer. From the beginning of June until the 17th of October I wrote nothing. Although I had so much to tell myself. But just when I have a lot to say to myself, then I write less. Maybe because writing takes a lot of time and speaking less.

Now I stopped talking and started writing in my notebook or rather writing to myself. I just have no intention of letting anyone read what I write, as I have long since ceased to intend to consume anyone’s time with my talk, except my own.

I’m writing to let me know that someone bumped into me on the street because they thought I didn’t give them enough room to pass, or I am stupid for the simple fact I had to walk in the same area with them. I write that a driver blocked all the space and looked at me, the poor pedalling, like a cockroach. I write that he did not move his car and I had to put myself in danger and go the opposite direction to pass him. I’m writing to tell myself that a company that declares itself “maximum green” only hires those who own a car (although it is known that now a good part of electricity is also produced in coal-fired power plants – for those with EV), although the whole activity is confined to a town no more than 3 miles in diameter.

I write to tell myself what I think, for I think that none of this could be interesting to others, except to show me how much they know and are, and I do not. Like I don’t know. But I write to tell myself that the more I try to understand the more I realize how less I am and know. How happy others are that they don’t have to work hard, and I already know. I am writing to tell myself that it is a shame that I have wasted so many years learning and reading and listening and reflecting, while others tell me that they, only they know how I should be, and only they know that I have not no way to be, because they already are. There is no more room.

I think that colleague I worked with five years ago was right when he said: “Those who work don’t have time to make money”. Then what that colleague said seemed nonsense to me. Now, if I apply this to myself, it is obvious that “Those who learn, listen and reflect have no time to understand and know.” The others, yes.

But to write all this seems to take a long time, so I start talking to myself again. I can’t wait to write to tell myself all these…