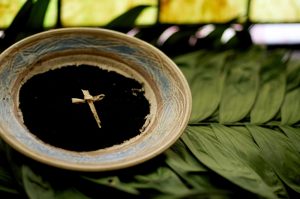 Today marks the beginning of Lent and from this day; we are invited, for the next 40 days to enter into a different way of living as we seek to deepen our relationship with God, with others and with all Creation.

We are invited to enter into a new life, to present ourselves in front of God as we are, to acknowledge our sin and to repent. Repentance, it is a word which plays a vital part in our faith; it is the one which save our souls and restores our own relationship with God.

In our Gospel reading we see Jesus dealing with those that brought to him the woman taken in adultery which offered them an opportunity for applying the Law of Moses in all its rigour. Throughout this encounter, there is no mention of the man involved.

The Pharisees seemed to have a great zeal against the sin, when it appeared afterwards that they themselves were not free from it. It is common for those that are indulgent to their own sin to be severe against the sins of others.

They were sufficiently experts in the law to reach a valid judgment and they were prepared to prescribe penalty of death to achieve their goal. ”In the law, Moses commanded us to stone such woman.”

They don’t see her as a human being; they care nothing about her as a person.

The woman is just a pawn in their evil game, what they really want is to find a way to compromise, to accuse Jesus.

The scribes and Pharisees bring her to Jesus, and set her in the midst of the assembly, as if they would leave her wholly to the judgment of Christ.

Now they called him ‘Teacher” but the day before they had called him a deceiver. Acknowledging his authority, they make him responsible for the answer that he will give to their tricky question: “Now what do you say?” Jesus’ answer is simple and clear and put them all to shame and silence: “Let anyone among you who is without sin be the first to throw a stone at her.”

They came to accuse him but they were forced to accuse themselves. Let anyone among you who didn’t facilitate the sin of this woman be the first to throw a stone at her. They went away, one by one, because they understood that the woman’s sin was the consequence of their sin.

In this Lent, we are invited to examine our souls and consciences, and whenever we find fault with others, we ought to reflect upon ourselves, and to be more severe against sin in ourselves than in others. Our care should be more to save our souls than to save our credit. We ought to be favourable, not to the sins but to the persons, and to think twice before to throw a stone at others. Christ is the only one that can heal the wounds of our souls. Christ will not condemn those who, though they have sinned, will go and sin no more.